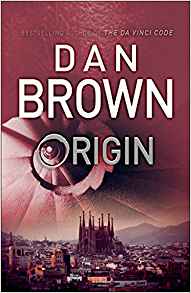 Our charity bookshop had a rather nice hardback edition of this thriller from Dan Brown’s Robert Langdon/Tom Hanks series, and I’m glad I bought it.

Here, we see Langdon as a mentor to a brilliant student, Edmond Kirsch, who has become a successful entrepreneur in the world of technology. And whereas Langdon has sometimes lacked depth, in this book his relationship with the beautiful Ambra Vidal (fiancee to the Prince Regent of Spain) is more nuanced than I expected. The book demonstrates the spread of social media and its ability to rapidly set the agenda. Even better, there’s a science fiction element to it in the form of Winston, an AI agent built and employed by Kirsch as his assistant.

There are also some quintessential Dan Brown moments, such as the hidden symbology in the Fedex logo, the history of the ampersand and, my personal favourite, the answer to I + IX (it’s 10 or 12, depending on your point of view).

The premise of the book is that Kirsch has made a great discovery about the origin and future of the planet – how did life on Earth begin and what is its destiny?

This is another in Dan Brown’s series of Robert Langdon escapades, and follows the usual formula. There’s a brilliant, female co-conspirator who seems to cast aside all her initiative and insight on meeting Langdon, becoming merely a foil for Langdon to show off his knowledge of history of art and symbology. And there’s a peculiar, driven assassin – in Da Vinci code it was an albino monk, here it’s a blond biker with spiky hair, but the character is largely the same.

Dan Brown’s books frustrate me greatly – there’s no doubt that the formula is successful and this book is a real page-turner – but there’s no depth to it. As an example, take Robert Langdon. We’re told he always wears the Harris Tweed jackets and the same make of shoe, has done for 20 years. As a wearer of Berghaus outdoor pursuits equipment, I respect that. Yet within minutes of trying an Italian suit and shoes (surely a case of product placement by the company, Brown mentions the maker so many times for no good reason) he makes a mental note to buy the new brand in the future. What?! So much for brand loyalty.