This is a lovely route from Keston to Holwood Farm and then on to the village of Downe. Having found the end of the footpath on a previous walk, we set off in the middle of last week’s snowfall, quite a break from the mundanities of lockdown and home-schooling.

The walk skirts around the grounds of Holwood House and eventually crosses its grand driveway near the main gates. Sadly, there’s no direct view of the main house from the footpath, although another range of houses is visible and is also quite impressive. Also at the edge of Holwood Estate are the remains of an oak tree attributed to William Wilberforce, the scene of a discussion he held in 1788 with Mr Pitt (the Prime Minister), the conclusion of which was to set about the abolishment of the slave trade in the United Kingdom.

On arrival at Downe, we were delighted to find that The Queen’s Head pub has converted one of its private dining rooms into a shop selling teas/coffees as well as general produce. They opened it in November due to the pub itself closing under lockdown rules and it’s proving very popular with hikers and cyclists. 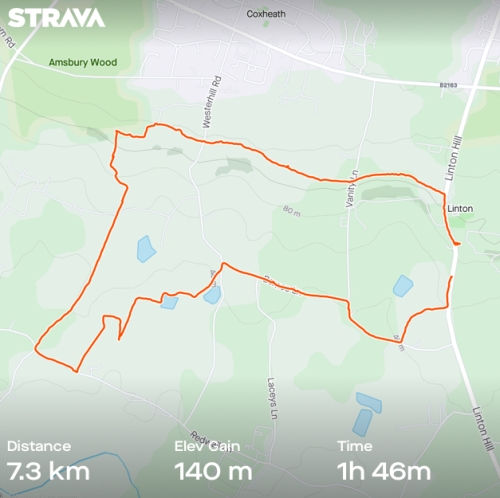 This is another walk from the Kent Pathfinder Guide, starting from the village of Linton. We had lunch at The Bull Inn, which has extensive views across the Kent countryside, including the orchards and vineyards that formed the route for our walk. The full walk in the book is 7 miles (11km) but we reduced it to 7km by walking just the second half, which crosses the Bon Fleur cross-country course (sadly, there weren’t any horses on this occasion) and includes extensive apple orchards and vineyards.

Lamberhurst is a pretty village near Royal Tunbridge Wells, with a couple of pubs. We had an excellent lunch at The Chequers, before walking the second half of the “Lamberhurst and Hook Green” walk from the Kent Pathfinder Guide. The plan had been to stop for refreshments at The Elephant’s Head at Hook Green, but unfortunately that was closed on Mondays!

The walk was almost entirely away from any main roads, making it very peaceful. There were plenty of grouse around the wooded areas (see below) and the walk also skirted the edge of a vineyard which seemed to have a fine yield of grapes this year. 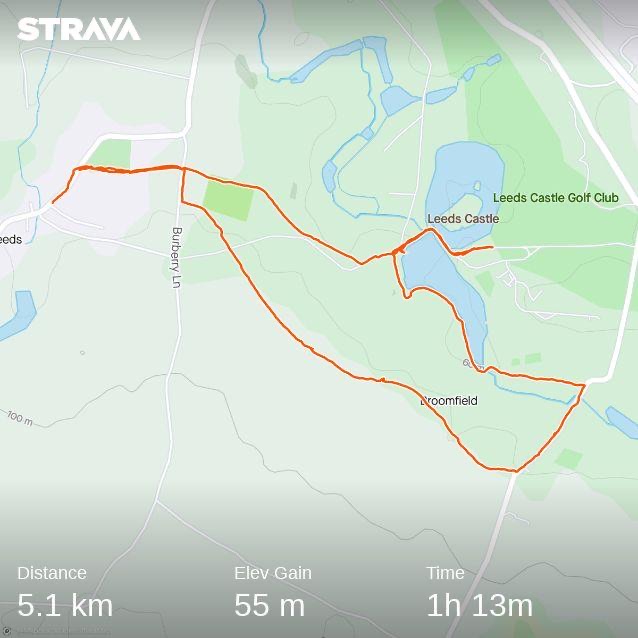 This is a short walk of about 5km, starting at the village of Leeds. Cutting through the village cricket ground, the route joins a footpath into the grounds of Leeds Castle, where you can get views of the castle itself and enjoy the views across the Great Lake. Whilst visiting the buildings themselves needs a visitor pass, the views are free and this was a delightful walk, including refreshments from the Whistle Stop coffee stop. 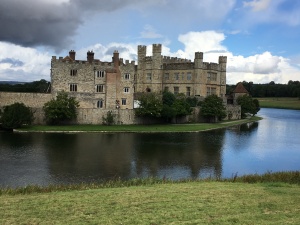 This 9km circular walk starts in the pretty village of Four Elms and cuts across farmland for a brief encounter with Bough Beech Reservoir. Don’t be fooled by the picture above though, which I took through a chain link fence – the route does not get particularly close to the water! While the reservoir and its visitor centre were disappointing, the footpaths through the fields were superb. One field was full of peas in pods ready to be picked, another boasted tall sweetcorn plants, with the cobs just appearing among the silky tassels. 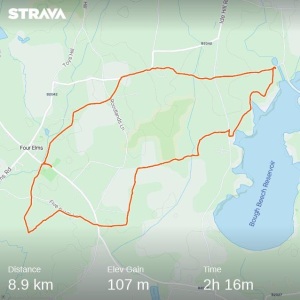 There is a garden centre at Four Elms with a delightful restaurant for refreshments.

Otford is a pretty village in Kent, with a very attractive pond. This walk starts from the car park next to the cricket ground, where parking was very reasonable – just £1 for 3 hours! We followed a route similar to this one on AllTrails. The route also goes close to Shoreham village with its pubs and bridge over the River Darent. Unusually for Kent, there are several climbs on the walk, some through the woods that were steep enough for steps to have been provided. The highlight was a descent through a meadow full of wild flowers, with views of rolling hills and unspoilt countryside.

This was a lovely, quiet 9km walk, starting from The Kentish Horse inn in Markbeech, as published on AllTrails. Markbeech is notable for a tree planted in 1897 to commemorate 60 years of Queen Victoria’s reign, and a village hall built at the same time. The walk was a delightful mixture of meadows and woodland, with only short periods along roads in between. We particularly enjoyed the fine views across the Kent countryside and the huge rock at Hoath Corner, from which The Rock Inn takes its name. It must be noted that although we were following footpaths marked on the map, the trails themselves were not obvious on the ground and the gates/styles were often well-hidden at the sides of fields. Other walkers had commented that this walk was very muddy, so be warned if trying this walk other than during the summer.

This is a circular walk from Ambleside to the village of Troutbeck via Wansfell. It’s the shortest of the ‘red’ walks in the excellent Pathfinder Guide, so made a good choice for a wet and windy day – fortunately, after an early tea at the Old Post Office tea rooms in Troutbeck, the weather was much improved. Highlights include a succession of waterfalls on leaving Ambleside and excellent views of Windermere on the return.

My family and I went for this lovely walk earlier this year. As well as some amazing views, we stopped at Annie’s Pantry at the half-way point for an excellent lunch sitting by the river.

Starting from National Trust car parks at Great Wood just outside Keswick, this walk climbs steadily through the wood and offers views over Derwent Water. It’s quite a steep walk down the river valley to Annie’s Pantry, but that’s the only refreshment stop on this walk and was well worth the effort. The highlight of the walk is the descent from Walla Crag to Cat Gill – the book has a nice photo of this, as well as lots of pictures of dogs!

This is a short, low-level walk around Loweswater, which is both a lake and the name of a small village. It’s also the first walk in the Pathfinder Guide. On the day that my family and I hiked around the lake, The Loweswater Show was coincidentally being held in fields nearby – making it quite a challenge to squeeze the car around the horse boxes leaving the show along the narrow country lanes. There is parking is lay-bys along the Northern side of the lake.

The route for the walk was quite easy to follow, being largely around the lake. There are some lovely sections on the North side of the lake where the path is directly adjacent to the water. On the South side, much of the route is through woodland, although there is a stony beach with several ropes suspended from the trees – we caught a sheepish teenager enjoying a swing on those before he felt self-conscious.

The walked was booked at 4 miles.