Video: Herb Sutter Back to the Basics at Cpp Con 2014

Herb Sutter’s Back to the Basics video is hardly an introduction to C++ as the name suggests. Rather, it clarifies his default choices when faced with some basic tasks like parameter passing, in the light of modern C++ techniques.

Don’t pass owning choices down the call stack – use non-owning raw pointers and references when you don’t need ownership transfer down the call stack, e.g. when callee parameter’s lifetime entirely nested within the called method. If the called method doesn’t participate in ownership, it should be agnostic to the lifetime of the object, whether on the stack, the heap, global, shared_ptr or unique_ptr. 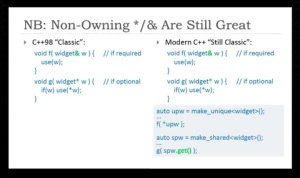 Another reason to use auto is performance – it guarantees no implicit conversion because there’s no explicit declared type. 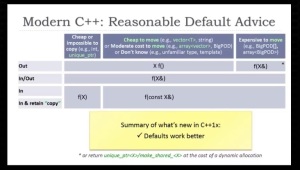 This is especially true for pass-by-value, which experts considered to be the new default choice for a while for moveable types, but is now only recommended for constructors that wish to retain a copy.

There was a bonus slide on returning multiple values using std::tie, which I’ve been doing for a while. 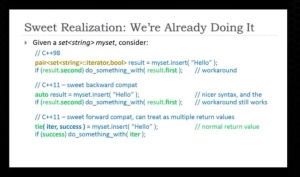 Finally, it seems that there’s a new term for Universal References – “Forwarding References”. I agree that this states the intention of T&& parameters better that Scott Meyer’s original name, although my eBook of Effective Modern C++ still uses the old name.