IET Meetup: Digital Twins, the Next Phase of the AI Revolution

I was lucky to get a ticket to this well-attended EngTalk at the Institute of Engineering and Technology.

The idea of an Intelligent Digital Avatar conjures up many images from a complete virtual world that one can safely define, develop and play in to rogue robots running amok and destroying mankind. The reality is much less dramatic but no less far reaching and exciting.

This year’s Turing Talk will be delivered by Mark Girolami; an academic statistician and the Sir Kirby Laing Professorship of Civil Engineering at the University of Cambridge.

Mark will discuss Digital Twins and chart their history to present day technological capability, looking at some of the advances being made and the opportunities along with the open challenges faced to realise the potential of Digital Twins.

The historical part of this talk was very interesting, with examples from 100BC (the Antikythera, the Greek instrument used to predict astronomical positions and eclipses), Kelvin’s mechanical device for predicting tides (used up to 1940, including D-day landings) to weather balloons to model and predict atmospheric pressure.

Mark’s premise was that, whilst 2015 was about BigData, 2020 is about Digital twins – layering mathematical models over complex data streams in order to extract useful information. He stressed the importance of the provenance of information, error checking and acknowledging bias in such models. He was also keen to point out that models should not be used to blindly infer causation (an observed effect might be caused by some outside factor that was not understood or included in the model).

In 2011, Ed Boyden won the IET Harvey Prize in recognition of his contribution in the field of optogenetics. Now some years later, he came to the IET to update the organisation on the progress his team have made in that field and how their contrarian approach has led to developments elsewhere.

The field combines light-based optical technologies and genetics to control the activity of neurons, enabling treatment of conditions resulting from a wide variety of brain disorders, such as epilepsy, post-traumatic stress disorder, and Parkinson’s disease.

Boyden described novel techniques, such as repeated miniaturisation of structures by injecting a lattice and using dehydration of hydrogels. This was discovered by reversing a process performed to increase the scale of neutrons in brain tissue so they could be visualised for research projects.

Marquee events like this are always very popular at the IET and this one was was very well attended. What was particularly notable was the number of well-informed questions after his presentation from researchers in similar fields who had travelled to attend the event.

The first address in this year’s Appleton lecture was given by Dr Sarah Atkinson. She gave a historical view of “fake news” created by manipulation of media, starting with the Cottingley fairies. This set the scene for Dr Hao Li’s excellent presentation of his research into animation of people, initially through long-running processes for film effects, but latterly in real-time for Animoji on the iPhone X.

There are plenty of applications for the techniques, such as video conferencing, social media and even films. However, the common theme was that, as these technologies become mainstream, we should no longer assume that video evidence of a speaker saying something is actual real.

I was lucky to attend the 2018 Mountbatten lecture at Savoy Place, London. This year’s speakers were Dr Julia Sutcliffe of BAE Systems and Air Marshal Julian Young of the Royal Air Force. 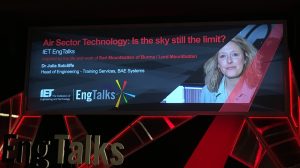 Dr Sutcliffe’s theme was “Air Sector Technology – is the sky still the limit?” and spoke of breakthrough technologies such as cloud computing and artificial intelligence as the 4th Industrial Revolution (after Steam, Electricity and Electronics/Computing). Her interest in military air systems is the generation of huge amounts of information for each single flight – not only from machine performance but also from crew health metrics. It would be a game changer to be able to receive the telemetry in real time so that appropriate action could be anticipated and actioned as soon as the plane returns to base. Other topics were unmanned systems for dirty or dangerous tasks and “Chemputation“, a method for using algorithms to build materials.

Air Marshal Young’s theme was “RAF 2118 – Engineering the next 100 years”. His point was that the Royal Air Force has been entwined with technology throughout its whole life, with innovation often the deciding factor in conflicts. Innovation has produced accuracy improvements in weapons delivery as well as amazing reliability for engines (such as the EJ200 in Typhoons). Novel technologies can also deliver increased operational performance, reduce production costs and reduce through-life savings – leaving more money to buy shiny new aeroplanes.

Interestingly, multi-core processors are not currently sanctioned for use in safety-critical systems because predictability is paramount. And whilst 3D printing could potentially allow spares to be produced “in theatre”, in practice it’s more reliable to produce them at home in a factory and send them in one of the daily flights transporting crew/cargo to the area.

The RAF Engineering teams breed a culture of innovation and “restless improvement” with each new generation.

Lisa de Bonis and Gary Jobe work for Havas, a communications and marketing firm who aim to demystify technology and find commercial/strategic applications for their customers. They frequently use cognitive systems like IBM Watson to understand imagery, language and unstructured data – enabling them to reason, learn and interact with the data. 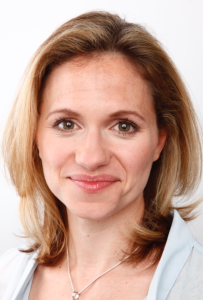 Lisa demonstrated the power of today’s AI via Google Quick Draw, which can recognise pretty basic hand-drawn pictures, based on millions of examples of drawings of the same subject by other people.

Perhaps the most compelling example was Lisa/Havas’s involvement in EagleAI – a commission by ITV News during the recent US Elections. Given that news organisations all had access to the same polls, ITV News wanted a different angle. Havas had just 4 weeks to put together a system that could analyse speeches, tweets, blog posts, debates from the election campaign. The aim was to use AI to determine the main motivators for the electorate and provide insight. Whilst traditional pollsters predicted a Clinton win, EagleAI predicted a Trump win, and found he was in the lead throughout (being more in touch with the motivations of the voters).

This evening’s lecture at the IET was given by Chris Aylett of the Motorsport Industry Association. Chris gave a fast-paced overview of the work of motorsport engineers within their own industry and the increasing crossover into other sectors. He is a fan of horizontal innovation, the application of under-used skills and capacity within a firm to satisfy demand from clients in other industries.

This is particularly appropriate for the world-class unique capabilities of R&D-based motorsport suppliers in the UK who are able to resolve disparate engineering problems, and do so very quickly.

Particular examples were given by speakers from Wirth Research, Prodrive and Lentus Composites. The latter were responsible for the design of the Team GB track bikes which did rather well at the Rio Olympics – having been developed in just 13 months.

There was also plenty to reference from the inspirational life story of Sir Henry Royce. Despite having only one year of formal schooling, he became an apprentice engineer and ultimately started his own business making cranes. Not only did he expand into making motor cars and design the first aero-engine to fly over 400mph (which was developed into the famous Rolls-Royce Merlin engine in WWII Spitfires) – he also designed the bayonet lightbulb.

This is the first meeting I’ve been to at the IET since the refurbishment of the premises at Savoy Place, London.

The location has always been amazing, but now the venue makes the most of it, with new entertainment space on the first floor leading to balconies that overlook the River Thames.

The presentation by Murat Basarir covered a Joint Venture by Arup and Mitsui to trial 8 electric buses on an urban bus route in Milton Keynes. The linear route is 24km long and takes about 50 minutes from one end to the other. Whilst they considered many battery charging options, they decided to install wireless charging plates into the road at the terminals, giving the bus 10 minutes to top-up before it turns round and runs the route in the opposite direction. There’s no need for the driver to physically plug in or swap batteries, so s/he gets a ten minute breaks, as per routine with diesel buses. The regular top-ups increase the range of the bus, so that it only needs a longer, trickle charge overnight back at the depot.