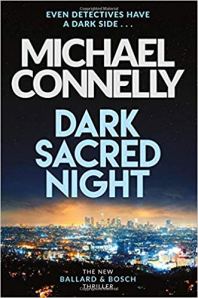 Harry Bosch continues to investigate the murder of his friend Elizabeth’s daughter, Daisy Clayton. Whilst he’s a volunteer at the San Fernando Police Department, he bends the rules by turning up at the LAPD to go through some old files. There, he meets Renee Ballard for the first time – she subsequently works out which cold case he’s pursuing, and they team up.

Meanwhile, for the ‘day job’, Bosch investigates a gang-land killing. A witness reveals some details of the shooting many years ago and Bosch heads up a forensic examination at a garage which might still harbour clues. This doesn’t go un-noticed by the gang and Bosch finds himself in considerable danger.

With Ballard and Bosch teaming up, the author has plenty of scope to highlight the similarities and differences between them. Both like to work alone and push on with a case even to the point of danger – Ballard was kidnapped in The Late Show, Bosch abducted in this thriller. Yet Bosch needs someone to keep him honest – he strays dangerously close to being a vigilante in this story and Ballard admonishes him for that.