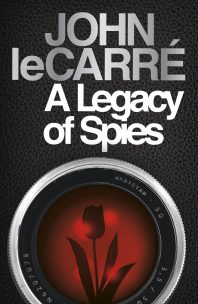 I was given a lovely hardback edition of this book for my birthday. Whilst this book stands alone, I’m sure I miss much of the sentiment portrayed by the lead character, Peter Guillaume, because I haven’t read any of the George Smiley series before.

There are two main storylines. In the present day, Guillaume is interrogated by the British Secret Service as to his role in Windfall, a cold war operation. The Service is being sued for negligence by descendants of two dead agents – Guillaume is still liable even decades after the event. In the past, we follow Guillaume’s life as an agent from his recruitment through to working with his best friend Alec and the resulting fiasco that took Alec’s life.

The story is beautifully told and reveals its secrets piece-by-piece as if we’re viewing it through a fuzzy lens – perhaps as the cold war agents would have discovered the information themselves.