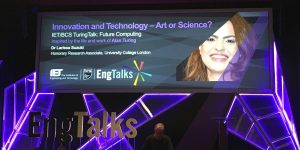 This evening at the IET was split into two lectures, the first by Larissa Suzuki entitled “Brave New Smart World”. Larissa covered a lot of ground, scaring the audience with figures on our over-population of the planet, over-consumption and lack of recycling. Then she showed how we may have potential to engineer our way out of these global problems – with smart cities, self-driving cars and smart-recycling.
Quote of the Day:

You cannot jujitsu your way out of bad data

The main Turing Lecture was by Andy Harter, who among other things invented VNC (used for connecting to remote computing devices). The stated intention of the lecture was to make the audience think about whether innovation and technology owe more to Art or Science. The lecturer admitted that his hope was that we’d agree that both are necessary. He covered a number of facets that he believes are the ingredients behind the best inventions: Creativity, Necessity, Storytelling, Timing, Retrospection, Observation, Laziness, Simplicity, Responsiveness and Generosity.

If necessity is the mother of all inventions, laziness is the father!

This quote was quite pertinent to the speaker, who invented VNC so that he didn’t have to leave his office to help a colleague down the corridor with issues on his machine!