Scott Meyers posted a video of his Universal References presentation from C++ and Beyond 2012. There’s also an article on the subject in the ACCU magazine Overload Issue 111, but I found the video much clearer (and more entertaining).

Meyers coined the term ‘Universal References’ for instances where the type of a variable or parameter is declared T&& and where T is a deduced type. It may look like an rvalue-reference, but it can also match lvalue-references: 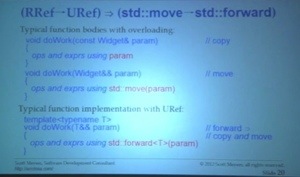 He also summarises the reference-collapsing rules as “lvalue-references are infectious”, a handy mnemonic from Stephan T. Lavavej.