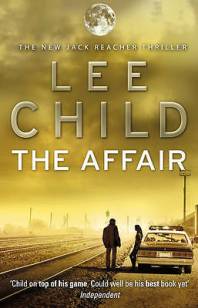 I bought a nice soft-back edition of this Jack Reacher thriller some time ago, but it was well worth re-reading. There has long been a gap in Reacher’s history – how did he go from being an elite investigator in the Military Police to travelling around America as a loner? This book fills in the gap and is one of the best in the series.

Reacher is assigned to go to Carter Crossing to shadow the town’s police department in their investigation of a murder. Although he’s supposed to be incognito, the police chief, beautiful Elizabeth Deveraux, unmasks him immediately. No matter, because the two develop a very close relationship working on the investigation together. The author plants seeds of doubt about Deveraux – perhaps she has a hazy past, taking revenge on former boyfriends? Could this murder, and two others of similarly beautiful young women, be her revenge after she was dumped by Captain Reed Riley, son of a US Senator? A side plot is that, sometimes the cover-up is worse than the crime. In this case, Reacher wants to know why local militia were employed to defend the military base outside the boundary – leading to the senseless murder of a journalist and the brother of one of the murder/rape victims. He confronts Colonel Frazer of military liaison at his office in the Pentagon – did he authorise the cover-up to protect his investment made building relationships with the Senator?

I always enjoy the Reacher books where he teams up with locals to solve the case – and as a bonus, this book features Reacher’s favourite Sergeant, Frances Neagley.