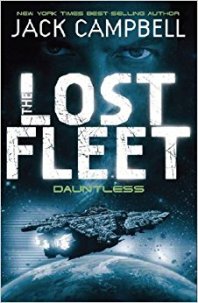 This is the first book in the “Lost Fleet” series, featuring Captain Jack Geary. I read “Guardian”, a book from later in the series earlier this year, and was hoping that this book would describe the moment that Jack Geary’s survival capsule was found in space. However, this book goes back to a period just a few weeks after he has thawed out (!) and is adjusting to life in the future. It’s 100 years after he’d famously escaped his last stand in a battle against the Syndicate Worlds, but he has no recollection of the passing of a century. Moreover, he was promoted to Captain upon his supposed death, and soon finds himself running the entire fleet due to his length of service and the ensuing legends that have built over the years.

The book covers a number of space battles, as well as describing the difficulty Geary faces in retraining his team in the lost arts of combat at near light speed. He faces opposition in the boardroom too – not everyone is happy to be shown the error of their methods. It’s an enjoyable read and highly similar to Guardian – it will be interesting to read a third from the series to see if the author follows the same template throughout.