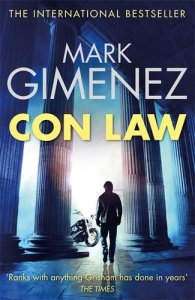 I’ve read several books by Mark Gimenez before and really enjoyed them, so I was surprised to look back and see that I hadn’t read one for over 2 years! Gimenez’ best work are the novels featuring A. Scott Fenney, but in this novel he introduces a new character, John Bookman (known as ‘Book’).

By profession, Book is a professor of constitutional law – he is apparently sort after for his views on media shows and has published widely. Yet, as well as being a celebrity by today’s standards, he is also known for pursuing legal cases on a pro-bono basis, often getting himself and his interns into trouble (they get to come along for the ride, literally, on his Harley). And in another quirk of fate, Book can look after himself – he’s highly proficient in Tae Kwon Do.

Although I enjoyed this book, I didn’t buy into the main character as much as other characters imagined by Gimenez. Book has many similarities to Lee Child’s Jack Reacher – including the womanising, the fights, the investigations and the maverick attitude. I’d rather read Jack Reacher any day – and the latest thriller, Night School, is next on my reading list.